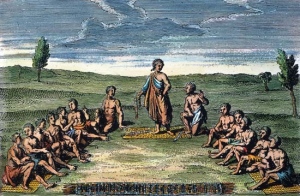 We all learned in school that Canada came about because a group of men met in tiny Charlottetown  IN 1867 and invented the British North America Act.

We were taught there were two founding nations "warring in the bosom of a single state." The French and the English.  And that's the way it happened.

Not so, according to constitutional luminary Peter Russell.

He says a crucial part of this country began long before Confederation, and includes the Aboriginal peoples and nations who lived here before a single European even dreamed of conquering new lands.

But even he, an expert on the subject, failed to fully appreciate how important pre-Confederation Canada was to the way this country would develop.

27 years ago, Professor Russell wrote Constitutional Odyssey: Can Canadians Become a Sovereign People? Now, Professor Russell has written what he calls "a corrective" to his earlier book. His new book is called Canada's Odyssey: A Country Based on Incomplete Conquests.

As we approach next Saturday's celebration of 150 years as a nation, we have invited Peter Russell, professor emeritus at the University of Toronto, to talk about this place we call Canada.

Click 'listen' above to hear Michael's interview with Peter Russell.