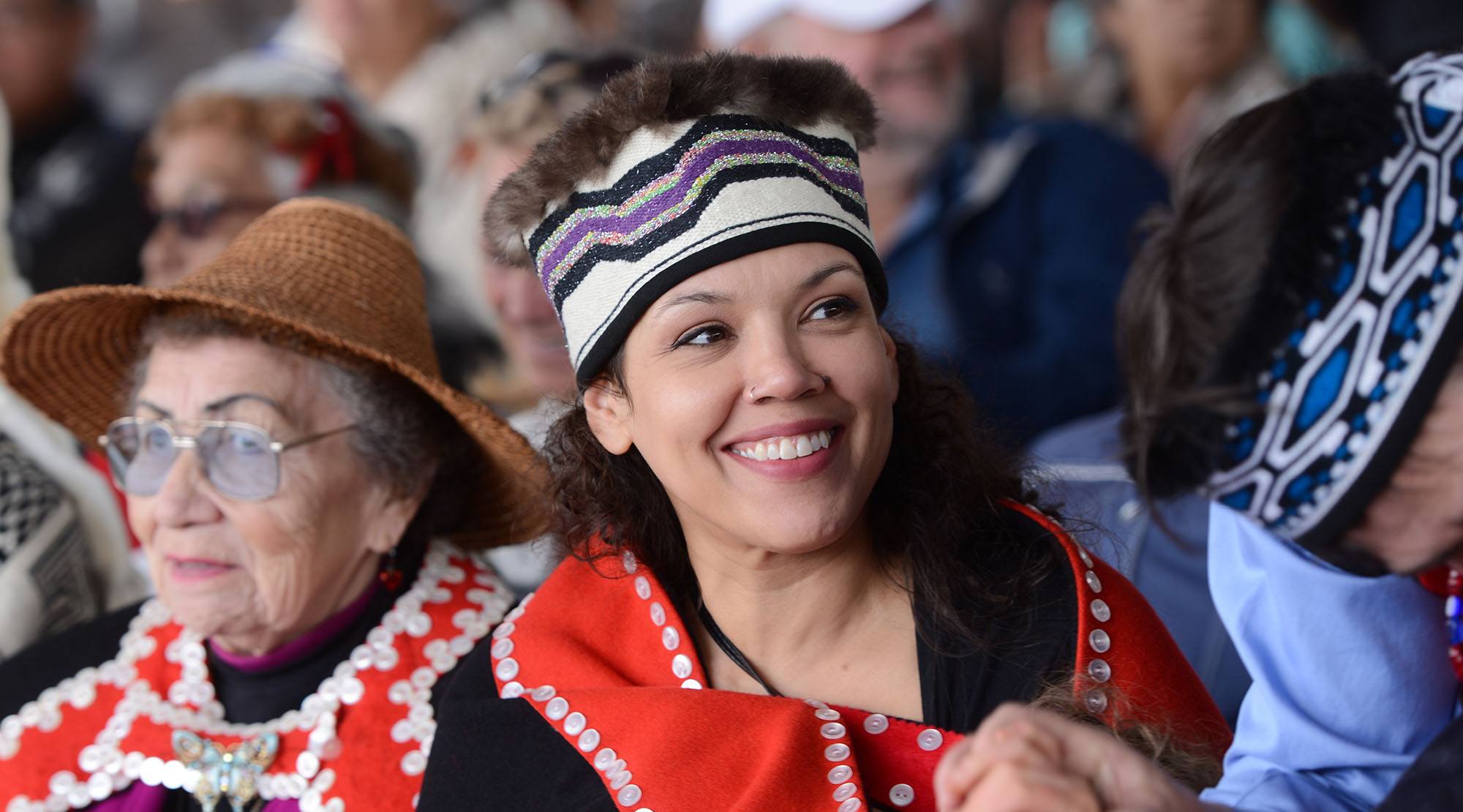 Summary: Kathleen Mahoney breaks down the legal case for legislation that clearly establishes Indigenous peoples' status as founders of Canada. Professor Mahoney is a leading human rights legal expert and renowned for her work on the historic settlement agreement between the Government of Canada and Aboriginal residential school survivors.

*This post was initially published on March 27, 2017 by The University of Calgary Faculty of Law Blog

The 150th anniversary of Confederation is upon us. The starting point for nation-wide celebrations will be Canada’s origin story, namely, that we are a nation founded by 2 peoples, the British and the French. Their concept of a nation, British North America Act, is held up as a monumental achievement forming the constitutional bedrock of our Canadian identity as well as the foundation for the rule of law and the free and democratic nation we believe ourselves to be.

But here’s the problem: our origin story is incomplete and misleading. In 1996, the Royal Commission on Aboriginal Peoples wrote, “A country cannot be built on a living lie.” (Vol II, at 1) My argument is that Canada’s origin story must be corrected through legislation that will recognize Canada as a country of three founding peoples, the British, the French, and the Indigenous. The rule of law is at the very root of Confederation but its application to indigenous peoples for the past 150 years has been dysfunctional, mired in racism and inequality. It must be re-imagined.

The rule of law has four universal principles:

To uphold and improve the rule of law and create a path towards understanding the importance of Indigenous rights in Canada’s constitutional framework, legislated recognition is imperative. In addition to being a human rights triumph, formal recognition that indigenous peoples were partners in confederation would provide irrefutable justification for inherent indigenous rights, including self-determination, the protection and strengthening of indigenous languages, cultures, legal traditions, and institutions.

Fifty years ago on the 100th anniversary of confederation, Chief Dan George, acclaimed author, poet, actor and first nations leader, rained on Canada’s confederation parade. He silenced a crowd of 32,000 at Empire Stadium in Vancouver with his withering “Lament for Confederation” describing Canada’s appalling treatment of indigenous peoples, treatment we have now come to understand as cultural genocide. Although Chief Dan George has long since passed away, our understanding of Confederation has not changed in 150 years and indigenous people’s trust and confidence in the rule of law is even less than it was in the past. When governments impose laws that consistently ignore the values and legal traditions of indigenous peoples, that they feel less obliged to respect them than citizens ruled by laws which strengthen their social bonds, should not be surprising. The resulting loss of peace, order and security that would have been enjoyed by indigenous peoples had they been recognized as equal partners in Confederation, is an ongoing cause of grievance and injury.

Legislative recognition of Indigenous peoples as founders of Canada would not only prominently remind Canadians of the historical facts of Indigenous peoples’ role in making Canada possible, it would also expose the deficiencies in the rule of law and our adherence to it. Recognition legislation would facilitate the rule of law’s development by strengthening equality rights, enhancing the democratic nature of Canadian law, and providing a foundation for reconciliation.

There is nothing revolutionary about this proposal. The concept of ‘recognition’ implies that accepted ideas are brought to awareness again. In 1982, the relationship between the Constitution and the indigenous peoples of Canada was recognized when Parliament passed section 35(1) of the Constitution Act, and in so doing, implicitly embraced the idea that indigenous peoples played a fundamental role in the foundation of Canada. Recognition legislation is therefore in harmony with Canada’s existing constitutional obligations. What is lacking is explicit legislative recognition that indigenous contributions were as important to the founding of Canada as the British and the French contributions were.

The importance of origin stories cannot be underestimated. An “origin story” explains how a culture, or in this case a nation, came into being. An origin story serves legal as well as epistemological and ontological functions. Connecting our past to the present and explaining its relevance to everyday life, helps us to navigate our relationships, and to consider deep ethical questions about how we should conduct ourselves. When origin stories describe the beginnings of politics and power, they serve as scripts for citizenship; a form of consent to a political vision and the rule of law. A society with an origin story that excludes those who were foundational to its creation creates instability, anger, alienation, and disaffection.

For the past several years, ordinary citizens of Canada have gone through a painful legal and existential crisis with respect to our origin story and our relationship with indigenous peoples. The Indian Residential School Settlement Agreement, the Government of Canada’s apology in Parliament, and the Report of the Truth and Reconciliation Commission—all have revealed shocking facts that contradict commonly held beliefs about Canada, its values, and the rule of law. The disconnect between our comfortable origin story and the cultural genocide perpetrated with impunity on indigenous Canadians for almost two centuries destabilizes everything from our understanding of ourselves, our values, our confidence in the rule of law, and our international reputation. The great American writer James Baldwin’s insight that “People are trapped in history and history is trapped in them,” captures our identity crisis and calls for some explanation and legal resolution.

What most Canadians don’t know is that the treaties that created Canada did so by applying and referring to indigenous legal traditions. If Canadians had an understanding of Indigenous legal traditions and their importance in Canada’s constitutional framework, deficiencies that lie behind the reception of common law and civil law into Canada would be exposed. The reception of British and French law into Canada was as culturally contingent to their home countries of origin as indigenous laws were to theirs. Had indigenous leaders been at the confederation table, a more pluralistic rule of law or multi-juridicalism would have emerged with the effect of strengthening all three legal traditions.

Indigenous Canadians point out that unless Canada’s origin story acknowledges their contributions to the founding of the nation, it perpetuates a lie. They say to ignore the impact of hundreds of indigenous nations with distinct cultures, legal traditions and unique knowledge and understanding of this part of the world, is simply illogical and unreasonable. Indigenous populations had laws, forms of governance and spiritual traditions for thousands of years. Moreover, indigenous knowledge systems, languages, and forms of social organization influenced the way the settlers survived and prospered. The indigenous population provided land for settlers, entered into trade agreements and peace and friendship treaties with them, and fought alongside them in colonial wars.

From an economic perspective, the fur-trade, the mainstay of colonial economies for more than 250 years, relied on the participation and co-operation of indigenous peoples for its existence. The fur trade opened the continent to exploration and settlement, missionary work, and social and other economic development. But by far the most significant contribution to the building of the nation and its economy were the vast tracts of land Canada acquired through treaties – lands that have produced immense riches making Canada one of the wealthiest nations in the world. And yet once the treaties were signed, the indigenous laws and values that they embodied were ignored. Instead, the laws and policies of the British and the French were used to eliminate indigenous nations as legal and political entities.

It is no surprise then, that at the Confederation table in 1867 there were no chairs for indigenous leaders. Instead of recognizing indigenous rights the Fathers of Confederation gave the federal government total control over, “Indians and lands reserved for the Indians”. After relegating the indigenous peoples to virtual non-citizen status, it became easy for the Fathers of Confederation and subsequent governments to promote the myth that only the British and the French were responsible for the foundation of Canada.

Shortly after Confederation, the Indian Act was passed, operationalizing the structural inequality created by the BNA Act that persists to this day. The Act prohibited inter alia, voting, the hiring of lawyers to fight for land rights, fundraising for political reasons, travelling off reserve, cultural activities, and denied Indian status for those who attended university.

The unequal treatment of indigenous peoples was legally and philosophically justified through the rule of law, more particularly the discovery doctrine and the formal equality principle. The doctrine of discovery was the legal fiction whereby Europeans claimed rights of sovereignty and ownership of regions they claimed to “discover.” Under this legal rule, indigenous peoples could not claim ownership of their lands, but only rights of occupation and use. The formal equality principle originated in teachings of Plato and Aristotle whose definition of equality was that likes were to be treated alike. Those who were different from the dominant comparator group could be treated differently.

The Aristotelian formal equality principle underpinned the imposition of the Indian Act. As long as all Indians (who were different from non-Indians) were treated the same under the Act, the formal equality standards were satisfied. Similarly, the Indian Residential Schools policy that treated Indian children differently compared to non-Indian children would not have set off alarm bells – it was central to the operating principles of government.

The formal equality theory was finally rejected by the Supreme Court of Canada in Andrews v Law Society of British Columbia, [1989] 1 SCR 143 (CanLII). The Court said the concept is seriously deficient in that it could be used to justify the Nuremberg laws of Adolf Hitler because similar treatment was contemplated for all Jews (Andrews at 166). The Court went on to say, “It was a wise man who said that there is no greater inequality than the equal treatment of unequals.” (Andrews, at 164) The doctrine of discovery has also been discredited as a socially unjust, racist concept in violation of basic and fundamental indigenous human rights.

As a result of these legal doctrines being discredited, it can no longer be said that the rule of law justifies their use. Nonetheless, until the origin story is changed, we will remain trapped in the narrow framework of an outdated and impoverished rule of law that has left indigenous Canadians marginalized, dispossessed, and unrecognized, and the rest of us intellectually debilitated, morally disempowered, and personally depressed, wondering who we really are.

The division between indigenous and non-indigenous peoples in Canada has grown increasingly deeper and more hostile since confederation. Fuelling the anger and dissatisfaction are disproportionate rates of incarceration, suicide, poverty, high-school drop outs, unemployment, addictions, and poor health, along with the missing and murdered indigenous women and a lower life expectancy.

The opportunity to set the record straight is upon us. Our true origin story is a powerful narrative that if adopted by law, will become part of the shared story of every Canadian for generations to come and will open up possibilities for genuine and lasting reconciliation. Recognition, reconciliation, and the rule of law go hand in hand. For the Parliament of Canada to recognize indigenous peoples as equal partners in the founding of the nation would be a powerful, long overdue recognition, and a profound gesture of reconciliation that will strengthen the rule of law and make us a better country. It would be a moment for the ages all Canadians could celebrate.

This post may be cited as: Kathleen Mahoney “The Rule of Law in Canada 150 Years After Confederation: Re-Imagining the Rule of Law and Recognizing Indigenous Peoples as Founders of Canada” (29 March, 2017), online: ABlawg, http://ablawg.ca/wp-content/uploads/2017/03/Blog_KM_Indigenous_Founders.pdf

PDF Version: The Rule of Law in Canada 150 Years After Confederation: Re-Imagining the Rule of Law and Recognizing Indigenous Peoples as Founders of Canada

*This post was initially published on March 27, 2017 by The University of Calgary Faculty of Law Blog